Hey, all! I honestly couldn’t be more excited to share with you a wonderful campaign effort, #MGGetsReal, in which five amazing authors have worked tirelessly to spotlight middle-grade books with tough topics, in hopes that kids who face real issues such as these will be able to see themselves within the pages of a book.

As a personal example, I’ll tell you, I was diagnosed with a hearing loss as a teen. I tried desperately to hide from it and pretend it wasn’t true. I felt ashamed and insecure. I wish more than anything that I could have met another kid like me, or even read about one. It might have kept me from losing so much of my confidence. And yet, I didn’t discover a book with a character like me until CeCe Bell wrote El Deafo. By then, I was an adult with my own family and had burned a lot of bridges along the way because people simply confused my lack of being able to hear them with me being a snob. I should have admitted my problem. I should have been honest. I shouldn’t have been ashamed. But I was.

It’s no surprise then, that this initiative is near and dear to me. I hope you’ll use the extensive list below to discover a book in which you too can see yourself or a child can see themselves. Please feel free to use the comment section below to recommend books for this ongoing list. And/or use the comments to tell us the happiness you may have witnessed when a kid was able to really connect with a book.

**Note: Most of the titles below could fit into multiple categories on this list.

Survival Strategies of the Almost Brave, by Jen White

The Higher Power of Lucky, by Susan Patron

Snakes and Stones, by Lisa Fowler

The Crystal Ribbon, by Celeste Lim 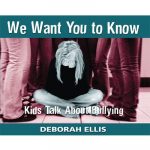 Call Me Hope, by Gretchen Olsen

The War that Saved My Life, by Kimberly Brubaker Bradley (disability)

We Want You to Know (Nonfiction), by Deborah Ellis

True (…Sort Of), by Katherine Hannigan

The Missing Pieces of Me, by Jean Van Leeuwen

Jasper and the Riddle of Ripley’s Mine, by Caroline Starr Rose

What Jamie Saw, by Carolyn Coman

This is Not the Abby Show, by Debbie Reed Fischer (ADHD)

Eliza Bing is (Not) a Big Fat Quitter, by Carmella Van Vleet (ADHD)

One for the Murphys, by Lynda Mullaly Hunt (abuse)

Everything on a Waffle, by Polly Horvath

Half a World Away, by Cynthia Kadohata

A Tangle of Knots, by Lisa Graff

The Pinballs, by Betsy Byars

The Seventh Wish, by Kate Messner

Sunny Side Up, by Jennifer L. Holm and Matthew Holm

What Flowers Remember, by Shannon Wiersbitzky

Hour of the Bees, by Lindsay Eagar

Half a Chance, by Cynthia Lord

The Nest, by Kenneth Oppel

The World From Up Here, by Cecilia Galante

The Liberation of Gabriel King, by KL Going

The It Girl, by Katy Birchall

The Reinvention of Edison Thomas, by Jacqueline Houtman

Anything but Typical, by Nora Raleigh Baskin

Marcelo in the Real World, by Francisco X. Stork

The Misadventures of the Family Fletcher, by Dana Alison Levy

The Family Under the Bridge, by Natalie Savage Carlson

My So Called Family, by Courtney Sheinmel

The Lotterys Plus One by Emma Donoghue (Lesbian/gay, multicultural, dementia, adoption)

The Second Life of Abigail Walker, by Frances O’Roark Dowell

The Girl in the Well is Me, by Karen Rivers

How my Private Journal became a Bestseller, by Julia DeVillers (self-acceptance)

Ruby Lee & Me, by Shannon Hitchock

Glory Be, by Augusta Scattergood

The Lions of Little Rock, by Kristin Levine

The Watsons Go to Birmingham, by Christopher Paul Curtis

The Last Fifth Grade of Emerson Elementary, by Laura Shovan

Things Too Huge to Fix by Saying Sorry, by Susan Vaught (Alzheimer’s, death)

Death of a parent:

The Secret Hum of a Daisy, by Tracy Holczer

What I Came to Tell You, by Tommy Hays

Be Light Like a Bird, by Monika Schroder (bullying)

What Happened on Fox Street, by Tricia Springstubb

Death of a sibling:

The Only Game, by Mike Lupica

After Eli, by Rebecca Rupp

See You at Harry’s, by Jo Knowles

A Summer to Die, by Lois Lowry

The Distance to Home, by Jen Bishop

Death of a Grandparent:

Sun and Spoon, by Kevin Henkes

Death of a pet:

Maxi’s Secret, by Lynn Plourde (bullying, finding your place in the world, blindness)

Small as an Elephant, by Jennifer Richard Jacobson

Courage for Beginners, by Karen Harrington

Some Kind of Happiness, by Claire Legrand

Watch the Sky, by Kristen Hubbard

The Sound of Life and Everything, by Krista VanDolzer

The Other Half of My Heart, by Sundee T. Frazier

Something About America, by Maria Testa

It Ain’t so Awful, Falafel, by Firoozeh Dumas

Every Single Second, by Tricia Springstubb

Bigger Than a Bread Box, by Laurel Snyder

Fish in a Tree, by Lynda Mullaly Hunt

May B, by Caroline Starr Rose

The Hank Zipper series, by Henry Winkler and Lin Oliver

Waiting for Normal, by Leslie Connor

The Wild Book, by Margarita Engle

The Absolute Value of Mike, by Kathryn Erskine

The Warriors, by Joseph Bruchac

The Road to Paris, by Nikki Grimes

The Whole Story of Half a Girl, by Veera Hiranandani

The Year of the Dog, by Grace Lin

The Garden of My Imaan by Farhana Zia

A Blind Guide to Stinksville, by Beth Vrabel  (Albinism)

A Blind Guide to Normal, by Beth Vrabel

Summer of the Gypsy Moths, by Sara Pennypacker

Finding your Place in the World:

The Charming Life of Izzy Malone, by Jenny Lundquist

The Looney Experiment, by Luke Reynolds

Following your dreams despite odds:

I am Drums, by Mike Grosso

The Ballad of Jessie Pearl, by Shannon Hitchock

The Dreamer, by Pam Munoz Ryan

Out of Tune, by Gail Nall

How to Steal a Dog, by Barbara O’Connor

Out of My Mind, by Sharon M. Draper (cerebral palsy)

Home of the Brave, by Katherine Applegate

Inside Out and Back Again, by Thanhha Lai

A Step from Heaven, by An Na

Skating with the Statue of Liberty, by Susan Lynn Meyer

Kiki and Jacques, by Susan Ross

Ruby on the Outside, by Nora Raleigh Baskin

All Rise for the Honorable Perry T. Cook, by Leslie Connor

The Goldfish Boy, by Lisa Thompson

Operation Pucker Up, by Rachel Alpine

After Ever After, by Jordan Sonnenblick

Freak the Mighty, by Rodman Philbrick

The Last Great Adventure of the PB&J Society, by Janet Sumner Johnson

The Summer of Hammers and Angels, by Shannon Wiersbitzky

The Sweetest Sound, by Sherri Winston

The Paperboy, by Vince Vawter

The Lemonade War, by Jacqueline Davies

Rules for Ghosting, by A.J. Paquette

A Smidgen of Sky, by Dianna Dorisi Winget

The Thing About Leftovers, by C.C. Payne

My Brother’s Shadow, by Tom Avery

Avenging the Owl, by Melissa Hart

On My Honor, by Marion Dane Bauer

The Thing About Jellyfish, by Ali Benjamin

Lost in the Sun, by Lisa Graff

Bridge to Terabithia, by Katherine Paterson

The Ethan I was Before, by Ali Standish

Wanting to fit in:

The Normal Kid, by Elizabeth Holmes

Sticks and Stones, by Abby Cooper

All the Broken Pieces, by Ann E. Burg

Odin’s Promise, by Sandy Brehl (Death of a pet)